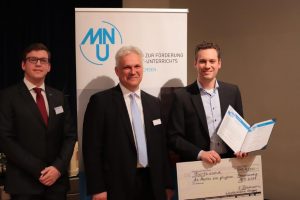 The phyphox team has been awarded the “Archimedes award” 2019 by the “Verband zur Förderung des MINT-Unterrichts” (MNU, loosely translated: association to forward STEM education). The award entails 4,000€ sponsored by the Westermann group. It is awarded yearly, alternating in the fields of mathematics and physics, to decorate innovative concepts and teaching methods as well as particularly commited teachers.

The app has been developed at the 2nd Institute of Physics at the RWTH Aachen University under the direction of Prof. Christoph Stampfer and Dr. Sebastian Staacks statt and it is being continuously refined in cooperation with the 1st Institute of Physics under Prof. Heidrun Heinke and a team of PhD students.

The award does not only mention the app itself, but the MNU emphasizes the value of the accompanying material like the demonstration videos. With more than 600,000 installations worldwide phyphox has been establish in many schools since its first release in September 2016.